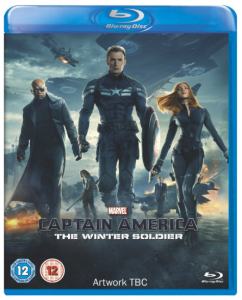 The Winter Soldier, Anthony and Joe Russo’s “remarkable and incredible” sequel to 2011’s Captain America is set to be released in the UK on Blu-ray on the 18th August.

After taking a deadly cocktail of chemicals designed to turn him into a super soldier, American private Steve Rogers (Chris Evans), finds himself locked into a coma. Decades later, Steve wakes up, and finds himself transformed into the super hero, Captain America. As Steve continues in his mission to protect America, he finds himself up against an unexpected and formidable enemy from the Cold War era, the Winter Soldier. This critically acclaimed follow up to Captain America: The First Avenger is the latest film from the Marvel Cinematic Universe, laying the foundations for next summer’s highly anticipated Avengers: Age of Ultron.

The Blu-ray is set to come with a making of feature, audio commentary, deleted scenes and a blooper reel.

For more information, head over to ComicBook.com.