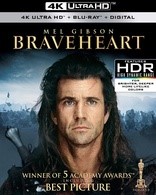 Paramount Home Media Distribution has officially announced that it will release Mel Gibson’s classic blockbuster Braveheart on Ultra HD Blu-ray on 15th May.

Originally released in 1995, Braveheart is a richly detailed saga of power, passion and the fight for freedom. Mel Gibson stars as William Wallace, a brave Scotsman who rallies his countrymen to liberation from oppressive English rule. The film also stars Sophie Marceau, Patrick McGoohan, Catherine McCormack and Angus Macfadyen.

Braveheart is the winner of five Academy Awards, including Best Picture, and is not one you want to miss in your Blu-ray collection. It comes with a number of special features, including audio commentary by Mel Gibson, a look back at the real William Wallace, and an exploration of how the film was written.