This weekend, Money Monster lands in cinemas across the UK. Directed by Jodie Foster and starring George Clooney, Julia Roberts and Jack O’Connell, this high-octane thriller tells the story of an irate investor who forcefully storms the set of a live financial TV show, taking its presenter hostage. With the eyes of the world watching, he proceeds to demand justice over what he alleges is a conspiracy to steal money from the world’s markets.

To get you in the mood, we’ve listed our three favourite hostage thrillers available on Blu-ray: 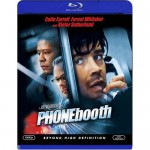 Whitaker and Kiefer Sutherland, Phone Booth tells the story of a morally bankrupt New York publicist, who answers a ringing telephone in a public booth. The mysterious caller then tells him that if he hangs up, he will be shot. The laser from a rifle gunsight which shines on his chest lets him know that this is no prank.

Special features include commentary by Joel Schumacher, and a number of trailers.

Nineties classic Speed is a white knuckle ride through the streets of LA, as we follow a bus which is rigged to explode should the speedometer drop below fifty miles-per-hour. L.A.P.D. SWAT Team specialist Jack Traven is sent on board the bus to attempt to

defuse the bomb, while his colleagues try to negotiate with the crazed terrorist. In the meantime, all Jack and his passengers can do is keep the bus at speed.

Starring Keanu Reeves, Dennis Hopper, Sandra Bullock and Jeff Daniels, Speed is a glorious throwback to the nineties which will excite any action fan. The Blu-ray comes with two audio commentary tracks from director Jan De Bont, and writer and producer Graham Yost and Mark Gordon, as well as an exclusive game.

Based on a true story, Captain Phillips documents the 2009 hijacking of the US MV Maersk Alabama, a

cargo ship which was the first US ship to be hijacked in two hundred years. Hanks plays Captain Richard Phillips, who attempts to form a relationship with his pirate captors in order to save the lives of his crew.

The Blu-ray includes two special features – audio commentary with director Paul Greengrass and an hour-long documentary on the making of the movie, which includes input from the real Captain Phillips.