This weekend, Burnt begins appearing in cinemas, seeing Bradley Cooper and Sienna Miller team up again for the first time since American Sniper.

Burnt tells the story of Chef Adam Jones (Cooper), who has destroyed his career with rockstar-like behaviour. In order to save his career, Jones travels to London to get clean and begin rebuilding his reputation. He plans to return to Paris and open a restaurant which will be awarded three Michelin stars, but first, he needs to recruit the best team he possibly can, including the beautiful Helene (Miller).

To get you in the mood for Burnt, we’ve listed a feast of food related Blu-rays for you to sink your teeth in to.

Ratatouille is a charming film by Disney Pixar, which follows the tale of Remy, a young rat with a taste for gourmet food who dreams of becoming a famous French chef. When an encounter with the owner of the house he lives under goes wrong, Remy finds himself in the sewers beneath the restaurant formally owned by his culinary hero, Auguste Gusteau. He sees this as the perfect opportunity to show the staff what he can do, leading to a hilarious sequence of events that turns the culinary world of Paris upside down.

Pixar once again delivers a masterclass in animation, which looks spectacular in high-definition Blu-ray. The disc also comes loaded with special features exclusive to HD, including Gusteau’s Gourmet Game, audio commentary with director Brad Bird and a deleted scenes graveyard. 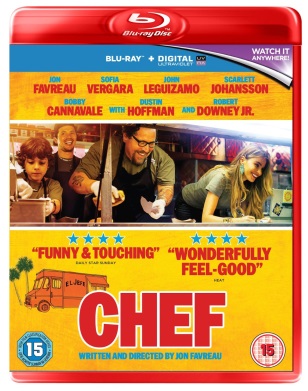 Jon Favreau demonstrates he is a jack of all trades by writing, directing, producing and starring in this passion project, Chef.

After repeatedly being told by his boss Riva (Dustin Hoffman) that he is not allowed to alter his restaurant’s menu in any way, Chef Carl Casper (Favreau) chucks his job in and decides to go solo. Now with the freedom to be creative, Casper decides to rebuild an old food truck, create his own menu and drive across America, rebuilding his love for food and his connection with his family at the same time. 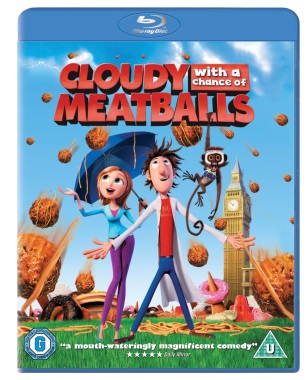 Cloudy with a Chance of Meatballs

Rounding off our food-inspired Blu-rays is another animated modern classic, Cloudy with a Chance of Meatballs.

Flint Lockwood, voiced by Bill Hader (of recent Inside Out fame), is a scientist who is often considered to be a few spanners short of a toolbox. However, when he invents a machine that turns water in to food, he realises it has the potential to save his town, which is currently facing a deep financial crisis due to its main source of income – a sardine cannery – being shut down. However, when his machine accidentally ends up in the atmosphere and it starts raining food, it soon becomes apparent that a storm is brewing…

Cloudy with a Chance of Meatballs comes with a wealth of extra features, including a making-of documentary, a music video created especially for the film, and some behind-the-scenes footage of the actors in the studio recording the voices of the characters.