In the UK, today is Wallace & Gromit’s Wrong Trousers Day. People are paying £1 for the privilege of wearing the ‘wrong trousers’ in their favourite colour, to work or school. The cause is noble – to raise money for sick and terminally ill children in hospitals and hospices around the UK.  To mark the opportunity of having a bit of fun at your own expense, while supporting an important cause, why not dedicate the weekend to watching Blu-rays from the legendary Aardman Animations, creators of Wallace and Gromit? 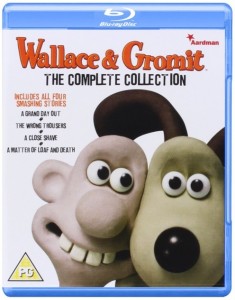 Can you believe the first Wallace and Gromit short film, A Grand Day Out, was released 25 years ago? It went down a storm at the time and was nominated for an Oscar. The British stop-motion comedy animation series, created by Nick Park of Aardman Animations consists of four short films and a feature-length film in total. Each installment has received critical acclaim. In case you don’t know, the series centres on Wallace, an absent-minded inventor with an insatiable love for cheese and Gromit, a silent yet intelligent anthropomorphic dog.

The characters have been described as positive international icons of modern British culture. BBC News called the plasticine characters “some of the best-known and best-loved stars to come out of the UK”. In fact it was said they have done “more to improve the image of the English world-wide than any officially appointed ambassadors”. Given the meticulous and painstaking detail that went into creating these beloved national heroes, why not watch the complete collection on Blu-ray? 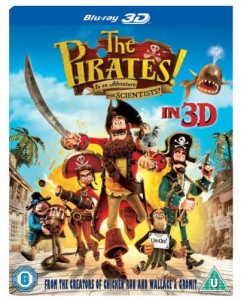 The Pirates! In an Adventure with Scientists

The Pirates! In an Adventure with Scientists is a fine illustration of Aardman’s artistic storytelling credentials. The story is set on the tropical high seas and in the heart of Victorian London, where Queen Victoria herself (voiced by Imelda Staunton) has a starring role. While H.R.M is gleefully nefarious, the real star of the show is the Pirate Captain (a husky-sounding Hugh Grant) who’s more interested in procuring cured pork for his ship’s regular “Ham Nite” feasts than plundering for valuable booty. However, Pirate Captain comes unstuck when he enters the Pirate of the Year contest and finds himself up against the stiff competition of Black Bellamy (Jeremy Piven), Cutlass Liz (Salma Hayek), and Peg Leg Hastings (Lenny Henry), all of whom have oodles of treasure to bolster their scoundrel credentials. But the Pirate Captain has a mascot (Polly) who may win him the prize yet. Polly is not a parrot as he and the crew believe, but rather the world’s only surviving dodo, as identified by Charles Darwin (David Tennant) when his famous ship the Beagle is attacked by the pirates.

Both in the story and craft, the attention to detail is immense. Again, it’s a perfect candidate for Blu-ray – look closely and you might even see the fingerprints of the animators!

Chicken Run, a sprightly, intelligent homage to The Great Escape, was the first feature-length film by Aardman and the first produced in partnership with DreamWorks. The plot centres on a band of chickens who see a smooth-talking Rhode Island Red named Rocky as their only hope to escape from certain death when the cantankerous owners of their farm decide to move from selling eggs to selling chicken pot pies.

As always Aardman’s films attract a star cast. Chicken Run is packed to the rafters with them, including: Julia Sawalha as Ginger, who is determined to save her fellow chickens from their impending doom on the Tweedys’ farm; Mel Gibson as Rocky the Rhode Island Red – an American rooster who crash-lands into the farm after getting distracted by Ginger, spinning on a weathervane, and bouncing off some telephone wires; Timothy Spall as Nick, a smart, portly rat who smuggles contraband into the compound and Imelda Staunton as Bunty, the group cynic.

Chicken Run is a great piece of work and richly deserves a fresh viewing on Blu-ray.