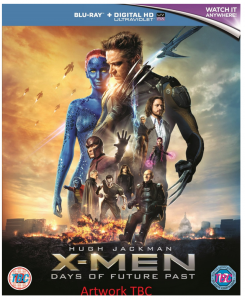 We’ve got a real treat in store for comic book fans, as this Blu-ray Monday we are giving away a copy of X-Men: Days of Future Past.

One of this summer’s biggest films, X-Men: Days of Future Past unites the classic cast from the first three X-Men movies (Patrick Stewart, Ian McKellen, Hugh Jackman et al) with their younger equivalents from 2011’s X-Men: First Class (James McAvoy, Michael Fassbender, Jennifer Lawrence and many more). With a storyline that twists its way through multiple timelines and a huge roster of mutant superheroes, Days of Future Past is nothing short of a comic-book epic. The Blu-ray includes an exclusive extended scene which will follow Professor X (Patrick Stewart), Magneto (Ian McKellen) and Iceman (Shawn Ashmore)  as they attempt to rescue Rogue from a military base guarded by robots called Sentinels.

X-Men: Days of Future Past has one of the most extensive cast lists of any superhero movie, with performances from old school X-Men Patrick Stewart, Ian McKellen and Hugh Jackman, as well as newbies James McAvoy, Michael Fassbender, Jennifer Lawrence and Nicholas Holt. So this week, we want to know who your favourite X-Man is, and why. Maybe you think Hugh Jackman’s amazing physique and adamantium claws means Wolverine is the ultimate X-Man, or perhaps you thought Halle Berry’s weather manipulating mutant, Storm, had cooler powers? Does Ian McKellen’s commanding presence really bring the role of the mutant leader Magento to life, or do you prefer Michael Fassbender’s more youthful take? Are there any X-Men from the comics that you’d like to see appear in the next big-screenX-Men outing, Apocalypse?