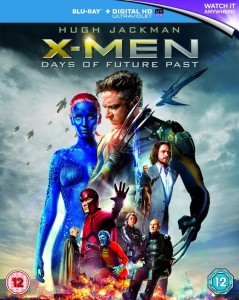 For this week’s Blu-ray Monday, we’re giving away a copy of X-Men: Days of Future Past, 20th Century Fox’s comic-book epic.

Uniting the cast of the original X-Men series (Patrick Stewart, Ian McKellen, Halle Berry et al) with the First Class generation (James McAvoy, Michael Fassbender, Jennifer Lawrence), X-Men: Days of Future Past has a good case for being the starriest comic book movie yet. The sprawling cast help tell a story that spans two time periods – an apocalyptic future where both mutants and mankind have been decimated by advanced robots called Sentinels, and the 1970s present where it might still be possible to stop the world following a path to destruction. The film features all of the incredible action, production values and special effects you’ve come to expect from the X-Men series, while bonus features allow you to go behind the scenes on the movie, cast and crew.

Now that Days of Future Past is, well… past, plans are afoot for the next steps in the X-Men saga. Director Bryan Singer is hard at work planning the next sequel, Apocalypse, and reportedly busy casting the next batch of stars to join alongside McAvoy, Fassbender and co. At the same time, Channing Tatum has been preparing to bring classic X-Men character Gambit to life in his own solo adventure. So our question this week is simple: which other stars would you like to see join the X-Men universe and what characters would they play? Do you want to see young versions of existing heroes like Storm or Cyclops, or would you rather see new heroes get some screen-time? Are there any favourite characters from the comic or cartoon series that you’d love to see on the big screen?