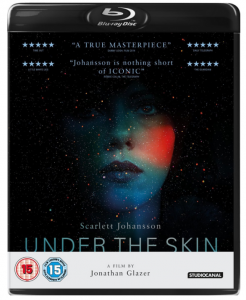 Jonathan Glazer’s modern sci-fi masterpiece, Under The Skin, is up for grabs this Blu-ray Monday.

Under The Skin is a “visually stunning and deeply disturbing” adaptation of Michel Faber’s 2000 sci-fi novel. The film sees Scarlett Johansson star as an alien roaming the streets of Glasgow, looking for raw flesh to devour.  On release, it received five star reviews from The Times, The Guardian, Rolling Stone Magazine and Total Film.

One of the best actresses of her generation, Scarlett Johansson has played characters ranging from Marvel superhero Black Widow, to artificially intelligent operating system Samantha in Her, and unhappy traveller Charlotte in Lost in Translation. In honour of Under The Skin’s release, this week, we want to know what your favourite Scarlett Johansson performance is, and why!