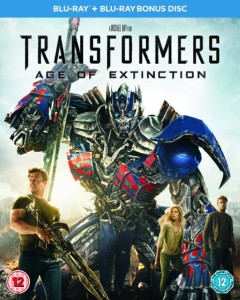 For this week’s Blu-ray Monday, we’re giving away a copy of the fourth instalment in the blockbusting Transformers franchise: Age of Extinction.

One of the summer’s biggest cinematic releases, Age of Extinction picks up after the devastating events of the last film, where Chicago was practically levelled by an invasion of evil Decepticons. As humanity faces up to a new threat which could leave it on the brink of extinction, it’s up to Optimus Prime and the Autobots to save the world. But now that the government has turned against them, they’ll need a new team of allies, including inventor Cade Yeager (Mark Wahlberg) and the fearsome Dinobots! Special features on the disc include an eight-part documentary on the making of the movie, and an in-depth interview with director Michael Bay on his unique brand of on-screen action.

Transformers: Age of Extinction continues the franchise with a brand-new human cast, with the likes of Mark Wahlberg and T.J. Miller taking over from Shia Lebouef and Megan Fox. At a time when Lionsgate is considering new Hunger Games movies without the series’ star Jennifer Lawrence, new Harry Potter universe films are on the way and Twilight is set to continue via a competition for budding filmmakers, we wanted to find out which franchises you think might benefit from a change of cast. Would you like to see a rival leading man take over from Tom Cruise in Mission: Impossible? Could you picture anyone other than Robert Downey Jr or Chris Hemsworth perform as Iron Man and Thor in the Marvel universe? What about female-led films like Sex & The City – who would make a great alternative Carrie Bradshaw?