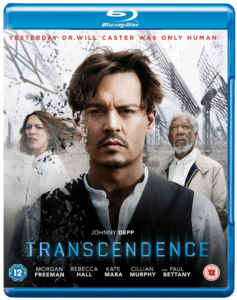 This Blu-ray Monday, we’ve got a real treat in store for sci-fi fans! We’re giving away a copy of Transcendence, the high concept thriller about the future of artificial intelligence, starring Johnny Depp, Morgan Freeman, Rebecca Hall and Paul Bettany.

Leading researcher, Dr Will Caster (Johnny Depp), is hoping to create a sentient machine that could combine the collective intelligence of all human knowledge with real emotions. However, Will’s research has made him a target for anti technology researchers, who think he has taken his ideas too far. Transcendence is the first ever movie from Oscar-winning cinematographer-turned-director Wally Pfister (The Dark Knight Trilogy), and according to critics, in this movie he proves himself to be “as clever a storyteller as he is a painter of moving pictures.”

Technology’s role in society has long been a topic of many science-fiction movies – and in many cases, artificial intelligence proves to be a big worry for the future of humankind. But which movie technology do you think is the scariest? Which is the most believable? Do you believe our reliance on technology is taking us down a path that leads to developments like those in Her, Transcendence or even The Matrix? Did the robotic adversaries of The Terminator, Robocop or I, Robot have you hiding behind the sofa? Let us know your favourite, or most feared, movie technology in the comments below.