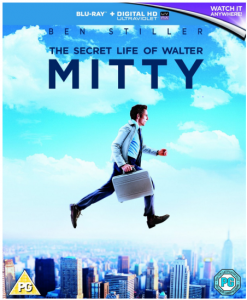 iving away a copy of Ben Stiller’s The Secret Life of Walter Mitty for this week’s Blu-ray Monday competition.

Ben Stiller directs and stars as the lead Walter Mitty, a fantasist who imagines incredible tales of romance and heroism to escape the monotony of his everyday life. One day Walter is abruptly woken from his day dreams after his job, and that of his co-worker, Cheryl Melhoff, (Kristen Wiig) come under threat.  Walter and Cheryl set out on a mission to save their livelihoods, and on this journey they encounter adventures beyond even Walter’s wildest dreams. Coming jam-packed with a bumper selection of deleted and extended scenes, the Blu-ray also boasts a photo gallery and José González’s music video “Stay Alive”.

Throughout his twenty years in Hollywood as an actor, director, writer and producer, Ben Stiller has played a leading role in countless successful movies. With such an illustrious career already behind him, we wanted to know what your favourite Ben Stiller movie is.  Perhaps it’s a comedy classic made with fellow frat-packers Owen Wilson, Vince Vaughn, Jack Black and Will Ferrell? With Starsky and Hutch, Dodgeball, Zoolander, Tropic Thunder and The Watch, there are plenty of examples to choose from! But Ben’s also showed a more sensitive side, appearing alongside leading ladies such as Cameron Diaz and Jennifer Aniston in romantic comedies like There’s Something About Mary and Along Came Polly. Whatever your favourite Ben Stiller movie or character, let us know in the comments and you could win!

To make it easier for us to contact you, remember to leave your Twitter details too. Since next Monday is a bank holiday in the UK, we’ll announce the winner and a new competition on Monday 28th April. Good luck!