For this week’s Blu-ray Monday, we’re giving away a brand new copy of the Oscar winning epic, The Revenant. 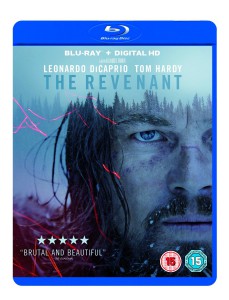 Leonardo DiCaprio stars as Hugh Glass, an explorer and frontiersman on an expedition through the frozen wilderness in 1823. After being attacked by a wild bear, Glass is betrayed by a member of his hunting team, and is left for dead in the wild. Against all odds, he survives, and begins an epic journey across the baron wasteland, battling personal demons as he seeks revenge against those who double crossed him.

The Revenant was undoubtedly one of 2015’s best looking films, picking up an Academy Award for its cinematography, meaning that Blu-ray or the new format – Ultra HD Blu-ray – are the best ways to enjoy the movie. Special features include a fantastic making-of documentary, and a stills gallery.

As usual you have two chances to win. For your first entry, retweet one of our competition posts. Then for a second entry, leave a comment below in response to the following question:

The Revenant is the film that finally landed Leonardo DiCaprio an Oscar for best actor, after three previous nominations: The Wolf of Wall Street, Blood Diamond and The Aviator. What’s your favourite DiCaprio film and why? Perhaps you liked his performances as Frank Abagnale Jr in Catch Me If You Can, or Billy Costigan in The Departed? Maybe one of his earlier roles, such as Jack Dawson in Titanic or Romeo in Romeo + Juliet is one of your favourites? Whatever you choose, let us know in the comments below.