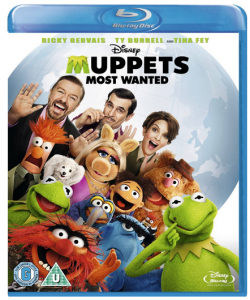 For this week’s Blu-ray Monday we are giving you the opportunity to win Disney’s latest musical comedy, The Muppets Most Wanted.

Kermit, Miss. Piggy, Fozzie Bear, Gonzo, Animal and the gang set off on a sell-out tour across Europe. However the troupe is unwittingly entangled in an international crime caper, masterminded by Constantine – the world’s most dangerous frog (voiced by Matt Vogel). With appearances from Ricky Gervais, Ty Burrell and Tina Fey, it is no wonder that critics are calling this latest movie a “Muppet Masterpiece”. The Blu-ray special features include the longest ever blooper reel in Muppets history, as well as twelve minutes of footage that was never shown in the cinema.

The Muppets Most Wanted is another triumphant big screen outing for Kermit and the gang, who have been entertaining children (and adults) around the world for decades. And with the recent success of The Lego Movie, a new Teenage Mutant Ninja Turtles film due out shortly and properties like Fraggle Rock in development, we want to find out other childhood favourites you’d like to see get the big-screen treatment. Do you still long to see He-Man, the Thundercats or Barbie in a feature-length adventure? Are you excited to hear the the Power Rangers are coming back? Who would you cast as the live action version of your favourite animated stars?