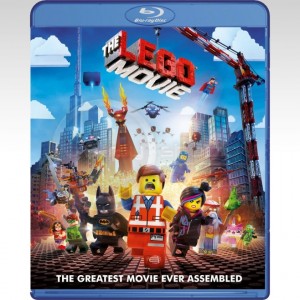 Happy New Year! To welcome you to 2015, we decided to give away one of the most popular films from 2014. And with its combination of wit, charm, heart and incredible visuals, we thought that The Lego Movie was the perfect choice.

The Lego Movie sees an ordinary guy named Emmet (Chris Pratt) mistaken for being the Master Builder, a legendary being who can save the universe. With the aid of an old mystic called Vitruvius (Morgan Freeman), a tough young lady named Lucy (Elizabeth Banks), and Batman (Will Arnett), Emmet will fight to defeat the evil tyrant Lord Business (Will Ferrell) who is bent on destroying the universe by gluing it together. Directed by Phil Lord and Christopher Miller (21 Jump Street, 22 Jump Street, Cloudy with a Chance of Meatballs), The Lego Movie is a riotous celebration of childhood, imagination and creativity which all the family will love.

We’re keeping it quite simple for the first week of 2015 – what movie are you most looking forward to this year and why? There’s a lot to watch out for, from the return of Star Wars, The Avengers, The Terminator and Jurassic Park, potential new franchises in Kingsman: The Secret Service and Pixels, a new James Bond adventure and award favourites like Birdman, Inherent Vice and Foxcatcher. And that’s just scratching the surface! Whatever you’re anticipating the most, let us know in the comments.