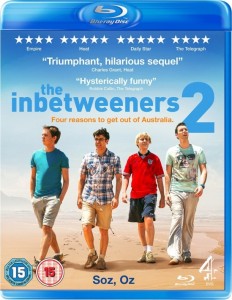 For this week’s Blu-ray Monday, we’re giving away a copy of hilarious comedy sequel The Inbetweeners 2.

Will, Jay, Neil and Simon head Down Under in this sequel to the record-breaking comedy. Last time we met the Rudge Park posse, they were causing chaos in Malia, Crete. Nearly a year on, Will (Simon Bird), Jay (James Buckley), Neil (Blake Harrison) and Simon (Joe Thomas) have gone their separate ways. Jay is staying with his uncle in Australia. Neil has actually managed to get a job. And Simon and Will are at different universities, but life isn’t panning out as they’d hoped. So when Jay emails to say he’s now become the biggest DJ in Australia and his life is one long party, the threesome need no encouragement to leap on a plane for a wild Easter break. Creators Damon Beesley and Iain Morris take over as co-directors of this eagerly anticipated sequel to the most successful British comedy of all time. Expect outback mayhem and big laughs!

The Inbetweeners have grown up a lot since we first saw them grace our television screens back in 2008, going from a late night sitcom to stars of some of Britain’s biggest ever films. And although the stars themselves have suggested a third film won’t happen, we’d like to remain positive and think about what another sequel might add to the series so far. So tell us what you think – do you want to see The Inbetweeners 3? Or are they all getting on a bit now? What would serve as a great storyline to get the gang back together – university? Marriage? Children? Whatever you’d like to see, let us know in the comments!