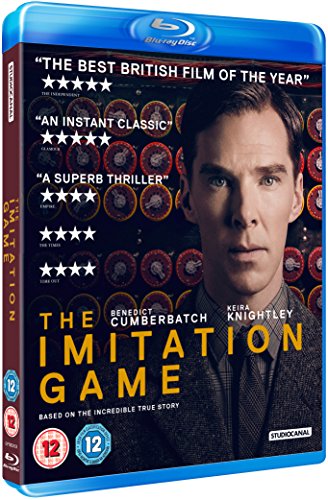 For this week’s Blu-ray Monday we’re giving away a Blu-ray copy of the Oscar nominated The Imitation Game, starring Benedict Cumberbatch and Keira Knightley.

This gripping thriller tells the incredible true story of an unsung war hero.  During the winter of 1952, British authorities entered the home of mathematician, cryptanalyst and war hero Alan Turing (Benedict Cumberbatch) to investigate a reported burglary. They instead arrested Turing on charges of ‘gross indecency’, an accusation that would lead to his devastating conviction for the criminal offense of homosexuality.  Little did they know, they were incriminating the pioneer of modern-day computing. Turing famous led a motley group of scholars, linguists, chess champions and intelligence officers. He was credited with cracking the so-called unbreakable codes of Germany’s World War II Enigma machine.

This is an intense and haunting portrayal of a brilliant, complicated man, who under intense pressure helped to shorten the war and, in turn, save thousands of lives. Cumberbatch is ably supported by Keira Knightley, Matthew Goode, Rory Kinnear, Allen Leech and Matthew Beard.

As usual, you have two chances to win. For your first entry, just click on the tweet button above. Then for a second entry, leave a comment below in response to this:

Many great films are based on true events. But what’s your favourite biopic?  This curated list of top 20 movies based on true stories should jog some memories. Alternatively, have you been inspired by anyone else who’s led a fascinating life and whose story could be told powerfully through film? They might already be famous or they could be somebody you know, who lives in relative obscurity.