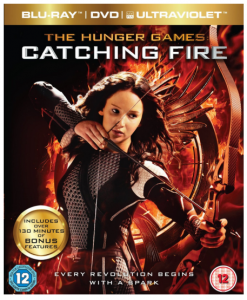 The Hunger Games: Catching Fire was the biggest box office hit of 2013, and this week we’re giving you the chance to take home a copy for Blu-ray Monday.

After her victory at the previous Hunger Games, Katniss Everdeen (Academy Award winner Jennifer Lawrence) is trying to keep a low profile, however tension in the Districts is mounting. In a desperate bid to keep the people entertained, President Snow (Donald Sutherland) introduces new rules for the 75th Annual Hunger Games, in which all participants must be reaped from the existing crowd of victors. Katniss and Peeta (Josh Hutcherson) are pulled back into the arena again one more time, but with rebellion building, will Katniss keep her eye fixed on her real enemy?

Katniss Everdeen has been described by critics as “a thrillingly atypical heroine” and even “a role model for our times”. So this week we wanted to find out which other fierce young females from the big screen have made the biggest impression on you. For example, world class computer hacker Lisbeth Salander (Noomi Rapace or Rooney Mara from The Girl with the Dragon Tattoo), teen assassin Hanna (Saoirse Ronan) and super-heroine Hit-Girl (Chloe Grace Moretz from Kick-Ass) have all packed a punch in recent years, and a new generation is following them.  Rising star Shailene Woodley is set to appear in Divergent later this month, and Game of Thrones star Emilia Clarke has been confirmed as the new incarnation of the Terminator’s nemesis, Sarah Connor. But which is your favourite, or who are you looking forward to seeing next? Let us know in the comments below.