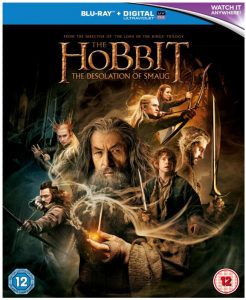 Peter Jackson’s “wickedly entertaining” latest J.R.R. Tolkein adaptation, The Hobbit: The Desolation of Smaug is up for grabs this Blu-ray Monday.

Bilbo (Martin Freeman), Gandalf (Ian McKellen), and the band of Dwarves resume their mission to take back the Dwarf Kingdom of Erebor in this latest film. Jackson conjures up more “far too many fabulous special effects even to mention” as the group encounter fire breathing dragons and take on a deadly group of trolls.  Unsurprisingly, this film is among the front runners for the Best Visual Effects Award at this year’s Oscars, so we’re excited to see it in glorious high definition. The special features on this Blu-ray will take you right into the heart of the film making process, with behind the scenes tours, production diaries and a director’s commentary.

Benedict Cumberbatch terrorises adults and children alike as the dragon in this movie, but he’s not the first high profile actor to become the voice of an animated character. So, this week, we want to know who your favourite movie voices are, and why? Whether it is another Peter Jackson creation, like Andy Serkis’ Gollum/Smeagol, or a different creepy creature, such as Toby Jones’ Dobby in the Harry Potter series? Maybe you are more attune to loveable performances in Disney favourites, like Robin Williams’ genie in Aladdin, or Tom Hanks’ Woody in Toy Story? With so many options to choose from we’re looking forward to your suggestions!