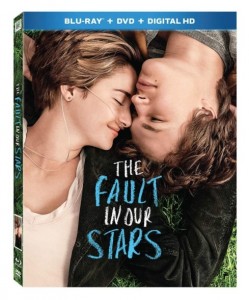 For this week’s Blu-ray Monday, we’re giving away a copy of the latest Young Adult sensation The Fault In Our Stars.

Adapted from John Green’s best-selling novel, touching drama The Fault In Our Stars tells the tragic love story of two cancer-stricken teens. Rising star Shailene Woodley (Divergent, The Descendants) leads the cast as Hazel, a teen suffering from cancer. At a support group meeting she meets fellow sufferer Augustus (played by Ansel Elgort) and the pair hit it off. She sports a breathing tube and he has a prosthetic leg, but the love struck pair won’t let their illnesses hold them back when it comes to matters of the heart. The Blu-ray includes a commentary and interviews with the filmmakers, several deleted scenes and some featurettes.

Shailene Woodley has made waves in the acting world in recent years – garnering praise for early roles such as George Clooney’s daughter in The Descendants, getting cast and then un-cast in The Amazing Spider-Man 2, and now starring in two of 2014’s biggest theatrical hits: The Fault in Our Stars and Divergent. But she’s not alone – a host of new young actors, including Dane DeHaan (Chronicle and Amazing Spider-Man 2), Theo James (Divergent), Jena Malone (Hunger Games: Catching Fire), Dylan O’Brien (The Maze Runner), Kit Harington (Game of Thrones) and Miles Teller (That Awkward Moment and the forthcoming Fantastic Four) to name just a few, are all building careers that could dominate Hollywood for years to come. So this week we want to know which young stars you like the most right now, and which you think will be the A-listers we’re watching in blockbuster movies in the future.