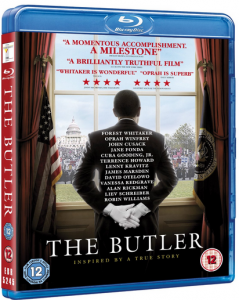 It’s that time of the week again, so for Blu-ray Monday we’re giving away a copy of The Butler, director Lee Daniel’s “electrifying” movie about the Civil Rights Movement.

Loosely based on the memoirs of Eugene Allen, a butler who served in the White House from 1952-1986, Forest Whittaker plays Cecil Gaines as he moves from the cotton fields of Georgia to Washington’s corridors of power.  The movie provides a whistle stop tour of the key events from modern history, including everything from the civil rights movement to the Vietnam War, seen through Cecil’s unique perspective as he serves eight US presidents. Highlights include appearances by Alan Rickman and Jane Fonda as Republican icons Ronald and Nancy Reagan, James Marsden taking a turn as the visionary JFK and Robin Williams donning a bald cap to appear as post-War President Eisenhower.

This week we want to know who your favourite screen president is. They might be a screen incarnation of a real president, like Anthony Hopkins’ Oscar-nominated portrayal of President Nixon, or Daniel Day Lewis Oscar winning President Lincoln. It could be a real president who has appeared on screen, as Bill Clinton did with cameo roles in First Kid and Contact,  or perhaps it’s one of Hollywood’s iconic fictional presidents like Harrison Ford in Air Force One, Morgan Freeman in Deep Impact or Bill Pullman in Independence Day.  With so many examples to choose from, we’re excited to see your suggestions below!