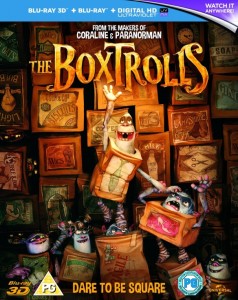 To ward-off the January blues, we’ve decided to give away The Boxtrolls – a heart-warming, fantasy-comedy film and a highlight of 2014. In fact it was so good The Boxtrolls has been nominated for an Oscar in the animated feature film category. It’s about to be released as part of a 2D and 3D Blu-ray pack – so viewers can immerse themselves in The Boxtrolls’ trashy underground world; without the smell.

The Boxtrolls tells the story of how a young orphaned boy raised by cave-dwelling and cardboard box-wearing creatures tries to save his friends from an evil exterminator. The film is based on the children’s novel ‘Here Be Monsters’ by Alan Snow. It boasts a stellar cast: Elle Fanning, Isaac Hempstead Wright, Ben Kingsley, Simon Pegg, Nick Frost, Toni Collette, Jared Harris, Richard Ayoade and Tracy Morgan provide the voices to the animations.

As always, you have two chances to win. For your first entry, just click on the tweet button above. Then for a second entry, leave a comment below in response to the following question:

What was your favourite animated film of 2014 and why? There were some real highlights in 2014: Big Hero 6, The Book of Life, Penguins of Madagascar, The Lego Movie (which we also gave away this month), How to Train Your Dragon 2, The Tale of the Princess Kaguya, Song of the Sea and more. This helpful list here may well jog your memory.