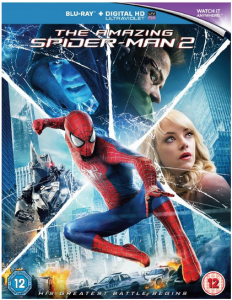 This Blu-ray Monday, we are giving away The Amazing Spider-Man 2, one of summer 2014’s superhero highlights.

Following the events of The Amazing Spider-Man, this web-slinging sequel sees Brit Andrew Garfield once again don the red and blue suit to defend New York and his girlfriend Gwen Stacey (Emma Stone) from a host of new villains, including Jamie Foxx as Electro, Paul Giamatti’s Rhino and Dane DeHaan’s Green Goblin. Directed by Marc Webb, the film combines incredible action and special effects with a strong emotional core and great chemistry between the leads. The Blu-ray includes nine exclusive deleted scenes, with commentary from Webb about their relevance and reasons why they didn’t make the final cut, and 100 minutes of exclusive featurettes delving into all aspects of the film’s production.

The Amazing Spider-Man 2 is Peter Parker’s fifth big-screen outing since director Sam Raimi launched the franchise back in 2002. But don’t expect it to be his last – Sony Pictures has spoken about plans to build out a universe of related films, including a third entry in the core series, as well as spin-offs featuring the comic’s other villains and anti-heroes. So the question this week is simple – what do you want to see next from Spider-Man on the big screen? Are you happy with Andrew Garfield in the lead role or would you like to see him pass the torch to another young actor? Which villains would you like to see him face off against? Would you like to see him team up with other big-screen superheroes? Whatever your thoughts, let us know in the comments!