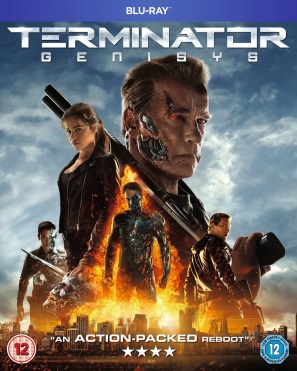 For this week’s Blu-ray Monday we’re giving away a brand new copy of Terminator Genisys, the latest installment in the Terminator franchise.

Terminator Genisys sees Schwarzenegger resume his iconic role as The Terminator, who must protect Kyle Reese (Jai Courtney), a soldier sent back in time by the leader of the human resistance, John Connor (Jason Clarke). Emelia Clarke, best known for playing Daenerys Targaryen in Game of Thrones, picks up the role of John Connor’s mother Sarah, who must work with The Terminator and Kyle Reese to fix events which may alter the future and destroy all of mankind.

The 2D and 3D Blu-rays both come with over an hour of special features, so there are plenty of extras for fans of The Terminator to sink their teeth in to. As usual, you have two chances to win. For your first entry, just click on the tweet button above. Then for a second entry, leave a comment below in response to the following question:

Following Terminator Genisys’ release, the studio behind the franchise – Skydance Studios – has said that the series will be put on hold during a “re-adjustment” period. With the future of The Terminator looking uncertain, what do you think should happen? Do you think they should take the story in a totally new direction, or keep the existing plot? Perhaps you think it’s time for somebody new to play the part of The Terminator? If so, then who do you think would be good? Perhaps somebody like Tom Hardy would be a good replacement for Arnie? Let us know your thoughts in the comments below.