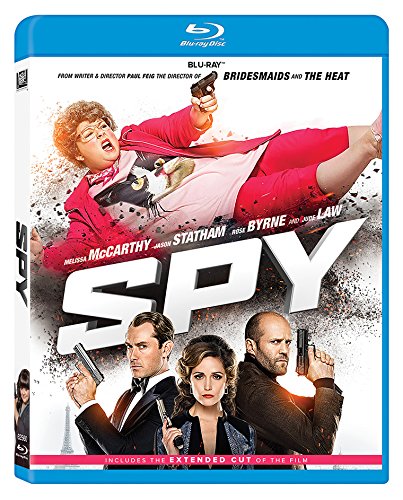 Also featuring Jude Law, Jason Statham, Miranda Hart and Peter Serafinowicz, Spy’s all-star cast is bound to get you giggling. McCarthy plays CIA analyst Susan Cooper, an unassuming agent who lives in the shadow of her partner, Bradley Fine (Law), whom she adores. However, when Fine goes missing during a mission, it’s up to Cooper to leave her desk-bound ways behind and go out into the field to infiltrate a dangerous arms dealer, and prevent a global crisis.

With nearly two hours of bonus features, including eight behind-the-scenes documentaries and a collection of improvised scenes, there’s plenty of extra laughs to be had.

Melissa McCarthy has become one of Hollywood’s leading comedy actresses, following roles in films such as Bridesmaids and Spy, and a starring role in next year’s Ghostbusters reboot. It’s a golden age for funny women in film, with others like Kristen Wiig, Amy Poehler and Tina Fey. But who do you think is the funniest? Is somebody missing from the list? Is there anyone we’ve forgotten? Let us know in the comments below.