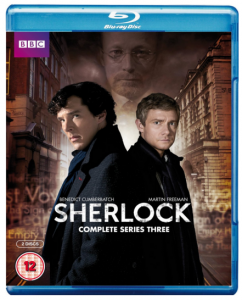 The finale of the brilliant third season of Sherlock aired last week in the UK.  So if you’re still buzzing from the excitement, you’ll be pleased to hear that this Blu-ray Monday we’ve got a copy of the entire third season up for grabs.

He’s been missing, presumed dead for two years, but just a few weeks ago Sherlock made a very welcome return to the small screen. The BBC’s award winning adaptation of Sir Arthur Conan Doyle’s novels stars Benedict Cumberbatch as the much loved sociopathic detective, Sherlock, and Martin Freeman as his trusty side-kick Doctor Watson, as the pair solve crimes in 21st century London. The Blu-ray includes all three 90 minute episodes, and also comes with features that look behind the scenes and explore how the series was shot.

Writer Steven Moffat has confirmed that a fourth season of Sherlock is on its way. So what would you like to see happen next at 221B Baker Street? With a few loose threads from the cliffhanger ending to tie up, would you like to see Sherlock face old foes or be challenged by new enemies? How do you see the relationship between Sherlock and John Watson developing now that John’s married and has a baby on the way? Are there any classic original plotlines you’d like to see adapted for the show, or any particular actors you’d like to see join the formidable cast? We’d love to hear your ideas for what has become one of the small screen’s undoubted dramatic highlights.