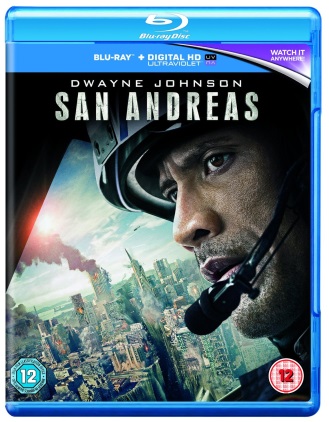 For this week’s Blu-ray Monday, we’re giving away a brand new copy of San Andreas, the earthquake disaster movie fronted by Dwayne Johnson.

After the infamous San Andreas Fault finally gives, triggering a magnitude 9 earthquake in California, a search and rescue helicopter pilot (Johnson) and his estranged wife make their way together from Los Angeles to San Francisco to save their only daughter. But their treacherous journey north is only the beginning, and when they think the worst may be over…it’s just getting started.

Continuing Johnson’s run of adrenaline fuelled action roles (following the likes of the Fast & Furious franchise, Pain & Gain and GI Joe: Retaliation), San Andreas was one of this summer’s most popular blockbusters, earning over $150 million in the US alone. Special features on the Blu-ray include an audio commentary from director Brad Peyton, documentaries on the real-life San Andreas fault, deleted scenes and a gag reel.

Dwayne ‘The Rock’ Johnson, once one of the world’s most famous wresting superstars, is now one of Hollywood’s go-to leading men. But what other figures from the world of sport have impressed you on the silver screen? In recent times, NBA star LeBron James stole the show from more established actors in Trainwreck, MMA star Gina Carano starred alongside Michael Fassbender, Ewan MacGregor and Michael Douglas in Haywire, and even David Beckham popped up in The Man from U.N.C.L.E. (and is now being lined up for a speaking role in Guy Ritchie’s next movie, King Arthur).   Other more established stars got started in sport, for example Jason Statham used to represent Great Britain in diving, while Arnold Schwarzenegger was a professional bodybuilder before getting his breakthrough role as Conan the Barbarian. So who’s your favourite sports star turned actor? Or which of your current sporting heroes do you think could cut it on the big screen? Let us know in the comments below.