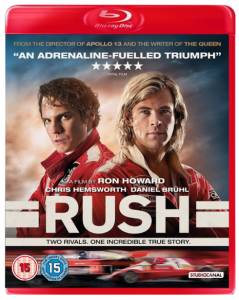 Formula 1 racing biopic Rush was one of the British contenders for Best Picture at the prestigious Golden Globes last night, and one of 2013’s cinematic highlights. So this Blu-ray Monday we’re giving you a chance to win your very own copy.

This adrenaline pumping film is based on the exhilarating true story of the 1976 Formula One World Championship, depicting the arch rivalry between two racing drivers, hedonistic British playboy James Hunt (Chris Hemsworth) and the cool and calculating Austrian Niki Lauda (Daniel Brühl) as they square up to seize the world title. The Blu-ray comes with some electrifying special features too, including an interview with the Oscar winning cinematographer Anthony Dod Mantle, revealing how he incorporated footage from the 1976 race into the film, and the way he filmed sequences by fitting cameras in the most unlikely of places, including underneath the foot pedals and inside the driver’s helmets.

The cinematography in Rush exquisitely captures the beauty of racing driving, so we wanted to find out which other movies celebrating cars you love. Like Chris Hemsworth, Steve McQueen starred as an iconic racing driver in the high octane thriller Le Mans, and he also set the standard for cinematic car chases with Bullitt, so do his movies set your pulse racing? Or are you more likely to be sucked into the underground world of street racing, as featured in Drive and the Fast and the Furious franchise? Or perhaps you prefer family friendly films, like Disney Pixar’s iconic Cars or the enchanting Chitty Chitty Bang Bang?