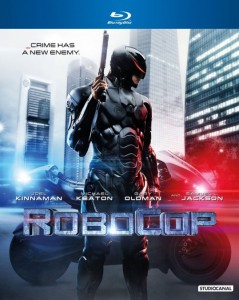 This Blu-ray Monday we’re giving you the chance to take home a brand new Blu-ray copy of Robocop, the explosive reboot of the classic action franchise.

In 2028, multinational conglomerate OmniCorp is at the centre of robotic technology. Its drones have been used overseas by the military for years, generating billions for OmniCorp’s bottom line. Now OmniCorp wants to bring its controversial technology to the home front, and they see a golden opportunity to do it when loving husband, father and good cop Alex Murphy (Joel Kinnaman) is critically injured in the line of duty. Turning him into part-man, part-robot police officer Robocop, Omnicorp sees big plans ahead for its creation. But they never counted on one thing: there is still a man inside the machine pursuing justice. Alongside the high-definition version of the movie, Robocop on Blu-ray also includes several deleted scenes and three making-of featurettes.

Robocop is a 21st century reinvention of the 1987 classic from Paul Verhoeven. Other iconic movies from the 80s, such as The Karate Kid and Evil Dead, have also been reworked in recent years, while other franchises like The Goonies and Top Gun also have sequels in development. So this week, we want to talk remakes or sequels to classic 80s movies. Which films or characters would you like to see return to the big screen, and why? Could anyone ever step into Michael J. Fox’s shoes as Marty McFly in a new Back to the Future? Do you still miss The Gremlins, Ghostbusters or Bill & Ted? Let us know what you’d like to see, and who would appear in them, in the comments below.