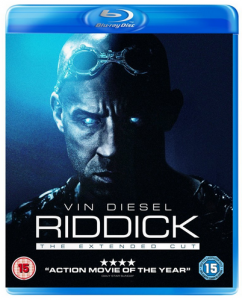 To help you beat the January blues, for the first Blu-ray Monday of the year we’re giving away a copy of Riddick, one of 2013’s top action adventure movies.

The third instalment of the Riddick saga opens after our antihero, bounty hunter and convicted criminal Riddick (Vin Diesel), has been betrayed by his own people and left for dead. When Riddick wakes up alone on a sun-scorched planet, he must fight off hostile alien predators. But will he survive? The science fiction action looks flawless and sounds ferocious on high definition Blu-ray, making it perfect entertainment for a wintry night in.

Amoral Riddick is one of cinema’s true antiheroes. So this week we wanted to know which other movie characters you just love to hate. Are you secretly a fan of downright nasty villains like Clockwork Orange’s psychopathic and malevolent Alex DeLarge or the viciously instinctive Jules in Pulp Fiction? Or perhaps you’re more partial to unscrupulous roguish charmers like Marvel’s Wolverine, Star Wars’ Hans Solo and Disney’s Captain Jack Sparrow? Let us know who think in the comments below.