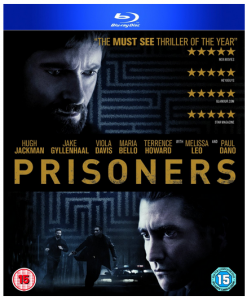 This week we wanted to brighten up your Blu-ray Monday by giving you a chance to win a copy of the tense, must-see thriller Prisoners.

Hugh Jackman stars as Keller Dover, a father who decides to take the law into his own hands after his 6-year-old daughter and her friend are abducted after a Thanksgiving meal. As the clock begins to tick, director Denis Villeneuve artfully captures Keller’s mounting desperation to find her with gritty cinematography, a riveting script and an outstanding cast. This movie will look great on high definition Blu-ray, and the special features include a behind the scenes interview with the stars.

Hugh Jackman’s “powerhouse performance” in Prisoners has been billed by critics as “convincingly ferocious” and “passionately determined”. Hugh Jackman is almost universally acknowledged as one of Hollywood’s favourite actors, so this week we wanted to find out which of his roles has been your favourite and why. He’s played in almost every genre, from cowboy adventurer in Australia, to deadly superhero Wolverine, he also led the Oscar winning Les Mis musical, and he’s even starred as a heartthrob in rom-com Kate and Leopold. With such a varied career behind him, there’s plenty to choose from, so we’re excited to hear your suggestions!