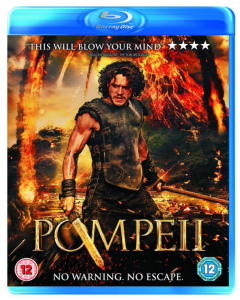 If you’re looking for a remedy to beat September’s “back to school blues”, we’ve got the perfect treat for you. This Blu-ray Monday, we are giving away a copy of director W.S. Anderson’s “preposterously enjoyable” summer blockbuster, Pompeii.

Almost 2,000 years ago Mount Vesuvius erupted, causing one of the biggest disasters in ancient history. Pompeii dramatises the epic struggle of Milo (Kit Harrington), a slave-turned gladiator, who must fight to save his lover, Cassia (Emily Browning) as their home town is consumed by Vesuvius’ toxic volcanic ash. W.S. Anderson brilliantly uses CGI to deliver some pulse-pounding, jaw-dropping special effects.

What is your favourite historical action epic movie of all time, and why? Are you a big fan of films which re-imagine ancient myths, such as Troy, 300, or Clash of the Titans? Or do you prefer movies like King Arthur and Alexander, which put a modern spin on the lives of real historical figures? Alternatively, perhaps you like films which combine the two, such as Gladiator, which follows the life of a fictional character in a real historical setting.