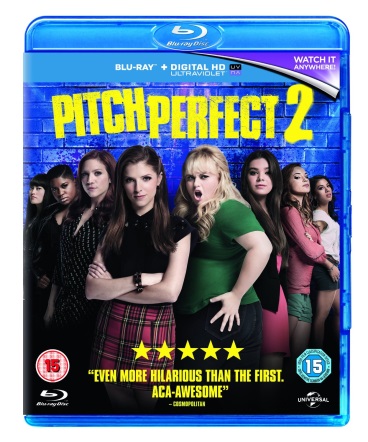 For this week’s Blu-ray Monday, we’re giving away a copy of Pitch Perfect 2, the sequel to the box office smash hit by the same name which we announced earlier this year.

Pitch Perfect 2 picks up where the first one left off, telling the story of Barden University’s all-female acapella team, the Barden Bellas, as they take on the world championship and hope to become the first American team to win. Starring Anna Kendrick, Rebel Wilson and Hailee Steinfeld, Pitch Perfect 2 is a musical tour de force, with the soundtrack debuting at number one on the Billboard 200.

The Blu-ray comes with a treasure trove of exclusive HD content, including a never before seen performance by the Treblemakers, making-of featurettes and a look at the World Championships of Acapella.

Pitch Perfect 2 sees a number of actors showing off their singing skills. Often with musical films, actors who you didn’t know could sing actually surprise you with their dulcet tones; Russell Crowe in Les Miserables, or Joaquin Phoenix in Walk The Line, for example. With that in mind, what’s your favourite musical movie performance? Who blew you away with a performance you weren’t expecting? Are there any actors you’ve seen that made you wince with pain as they fell horribly flat? What other stars would you like to see belt out a tune?