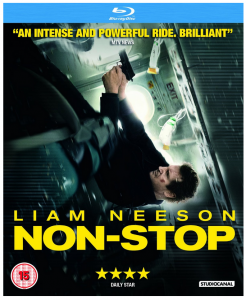 For this week’s Blu-ray Monday, we are giving you a chance to win a copy of Non-Stop, the “ridiculously enjoyable” action and whodunit thriller starring Liam Neeson.

Air Marshall veteran Bill Marks (Liam Neeson) is on board a regular transatlantic flight from New York to London. Events take a turn for the worse after an anonymous message is left warning that every 20 minutes a passenger on his plane is going to be killed, unless $150 million is paid into a mystery bank account. Now, Bill is caught in a race against time to identify the culprit and save the passengers on the flight. The highly charged action set pieces make Non-Stop a perfect slice of high definition entertainment.

Like Non-Stop, many a film has featured an airborne sequence, so for this week’s competition, we’d love to know which is your favourite. Are you in awe of the high octane flight sequences from action classics, like Air Force One, Con Air and Top Gun? Or perhaps you prefer films that feature less conventional means of flying? If so, maybe you’d like a ride in the floating house in Up, Hagrid’s bewitched motorbike in the Harry Potter movies, or E.T’s flying bicycle?