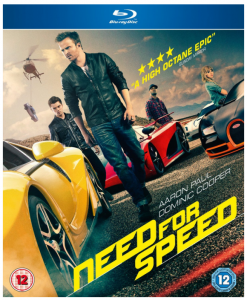 Good news for adrenaline junkies, as for this week’s Blu-ray Monday we’re giving away a copy of automotive racing thriller, Need for Speed.

Fresh from prison, street racer Tobey Marshall (Aaron Paul) sets out on a mission to avenge his friend’s death at the hands of a rival racing driver. Carnage ensues as Tobey races through the US, trying to track down the culprit. The Blu-ray comes jam packed with fast car chases, vehicle mayhem and high octane action.

Need for Speed is based on the most successful automotive video game franchise of all time. So, this week, we want to know what your favourite video game inspired movie is? With epic fight scenes and colossal  special effects, perhaps you are a die-hard fan of Tomb Raider, Prince of Persia or Resident Evil? Or, last month it was announced that Sonic the Hedgehog would be getting his own movie, so are there any other video games you would like to see adapted to the big screen?