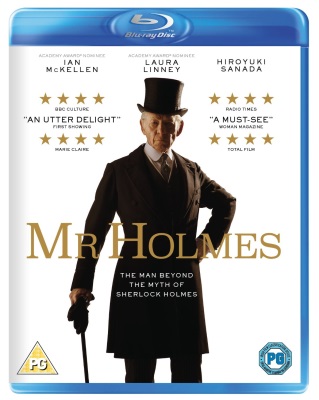 For this week’s Blu-ray Monday, we’re giving away a brand new copy of Mr Holmes, which sees Ian McKellan take up the role of the world’s most famous detective.

Mr Holmes introduces us to an aged Sherlock Holmes who has retired from a long career of solving mysteries, only to grow old and frustrated with how he was represented in the novels published by his former partner, Dr Watson. Holmes, who now lives an isolated life with only his housekeeper and young son for company, is troubled by an unsolved case from thirty years before which led to his retirement. As he battles with a fading memory, viewers are taken on a journey through Holmes’ past as he tries to piece the case together and work out what went wrong.

As usual, you have two chances to win. For your first entry, just click on the tweet button above. Then for a second entry, leave a comment below in response to the following question:

We have seen many performances of Sherlock Holmes in the past few years. From Benedict Cumberbatch in the BBC series, to Robert Downey Jr in the Sherlock Holmes movie franchise and Jonny Lee Miller in the US-based TV show, each has bought their own style and personality to the character. Who has been your favourite Sherlock so far? Did you like the awkwardness Cumberbatch bought to the role? Or maybe the humour that Downey Jr injected in to his films with Jude Law? Is McKellen’s portrayal a breath of fresh air? If you didn’t like any of them, who would you pick to don the deerstalker? Let us know in the comments below.