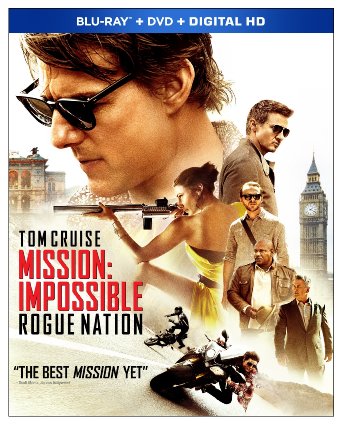 Tom Cruise resumes his role as IMF agent Ethan Hunt, who must save the world from a shadowy organisation known only as The Syndicate, which wants to destroy IMF and all those who work for it. In order to succeed, he must reassemble his disbanded team to bring down The Syndicate before it’s too late. Starring alongside Cruise are some familiar faces, including Simon Pegg, Ving Rhames and Jeremy Renner.

Of course, the Blu-ray includes some great special features, including commentary by Tom Cruise and director Christopher McQuarrie, a look at the filmmakers’ inspirations and various features on the movie’s stunts.

Simon Pegg, Ving Rhames and Jeremy Renner are just three of the familiar faces you’ll see in Mission Impossible: Rogue Nation. With the next Mission Impossible movie already in the pipeline, who would you like to see make an appearance in the next film? Perhaps you’d like to see a big name like Tom Hardy or Matthew McConaughey, or maybe somebody a little less well-known? Simon Pegg obviously brings a comedic element to the movie, so would you cast another comedian? Somebody like Jonah Hill or Rebel Wilson, maybe? Let us know in the comments below.