Bello! For this week’s Blu-ray Monday, we’re giving away a brand new copy of Minions, the hilarious spin-off from the Despicable Me franchise.

Minions are small yellow creatures that are as old as time itself. Throughout the ages, they have unsuccessfully served a number of villainous masters, nearly all of whom accidentally died through the i 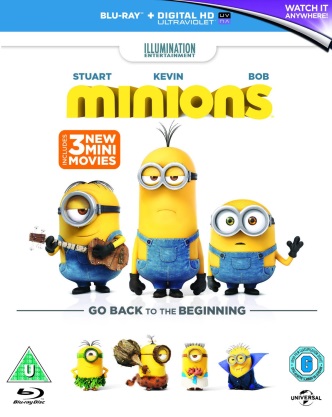 ncompetence of the Minions. In order to stop any more nasty accidents, the Minions isolate themselves in Antarctica, a place where it’s near enough impossible to hurt anybody. However three young Minions decide a life of solitude isn’t for them, and embark on a round-the-world trip to join super-villain Scarlet Overkill, played by Sandra Bullock.

Minions comes with three mini-movies, a number of deleted scenes and documentaries about the various production elements of the movie, including the animation and special effects.

In a year when we’ve seen so many great animated films, which gets your vote as the best? Does Minions top the list, or does Inside Out, Hotel Transylvania 2 or Shaun the Sheep pip it to the top spot? Or maybe Big Hero 6, which came out right at the start of the year? Or perhaps we’ve forgotten one? Let us know in the comments below.