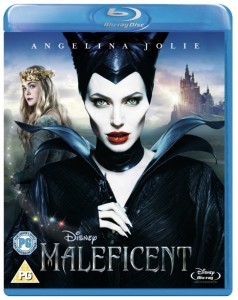 For this week’s Blu-ray Monday, we’re giving away a copy of Malificent, the untold story of Disney’s  iconic villain from the 1959 classic Sleeping Beauty.

Starring honorary dame Angelina Jolie, Malificient sees a beautiful, pure-hearted young woman growing up in a peaceful, idyllic forest kingdom, until one day an invading army threatens the harmony of the land. Maleficent rises to be the land’s fiercest protector, but she ultimately suffers a ruthless betrayal—an act that begins to turn her pure heart to stone. Bent on revenge, Maleficent faces an epic battle with the invading king’s successor and, as a result, places a curse upon his newborn infant Aurora. As the child grows, Maleficent realizes that Aurora holds the key to peace in the kingdom—and perhaps to Maleficent’s true happiness as well. As well as the high definition presentation of this visual spectacular, the Blu-ray includes several deleted scenes, a detailed look at how the Disney team reimagined Malificent for a new generation and documentaries on the making of the movie.

Malificent has followed Alice in Wonderland and Snow White to the big screen as live action retellings of animated classics. And there are more to come – sequels to Alice in Wonderland and Snow White are in the works, along with plans to reimagine The Jungle Book, Beauty & The Beast and The Little Mermaid. How do you feel about the current trend for classic animated fairy tales to get Hollywood makeovers? Are there any animated favourites you’d like to see come to life, or any that you think should be left well alone? Who would you cast as a live action Aladdin or Elsa from Frozen? Let us know what you think!