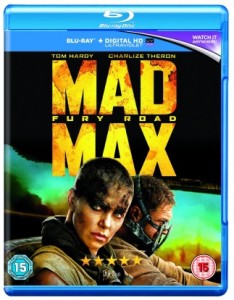 For this week’s Blu-ray Monday, we’re giving away a brand new copy of Mad Max: Fury Road, the critics’ must-watch film of the summer.

Tom Hardy and Charlize Theron star in the fourth high-octane post-apocalyptic instalment of the Mad Max franchise. Hardy takes up the role of Max Rockatansky, who is captured by a gang of outlaws who use him as a living blood donor. The leader of the outlaws – Immortan Joe – is enraged after one of his lieutenants, Imperator Furiosa (Theron), escapes his citadel with his five wives, freeing them from captivity. He launches a pursuit across the desert wasteland to track down Furiosa, leading to an extended and dangerous chase.

The Blu-ray comes with over an hour of special features, including a behind the scenes look at the production of the film, a feature examining the crazy stunts, and interviews with the cast and crew.

Mad Max: Fury Road wowed critics and audiences alike when it appeared, even being voted the best film of the year by international film critics. But in a year when we’ve already seen big releases such as Inside Out, Terminator Genisys, Avengers: Age of Ultron and Jurassic World, what do you think is the best film this year? Is it indeed Mad Max, or does something else deserve the award? Do you think any releases coming up, such as The Martian, James Bond: Spectre or Star Wars: The Force Awakens, will be better? Let us know in the comments below.