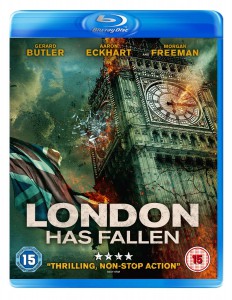 The sequel to the worldwide smash hit Olympus Has Fallen begins in London, where the British Prime Minister has passed away under mysterious circumstances. His funeral is a must-attend event for leaders of the western world. But what starts out as the most protected event on earth, turns into a deadly plot to kill the world’s most powerful leaders, devastate every known landmark in the British capital, and unleash a terrifying vision of the future. Only three people have any hope of stopping it: the President of the United States (Aaron Eckhart), his formidable secret service head (Gerard Butler), and an English MI-6 agent who rightly trusts no one.

Continuing the unapologetically old-school action of Olympus Has Fallen, London Has Fallen is an explosive spectacle on Blu-ray. Special features include a Making Of documentary and a deeper look at the training and preparation Gerard Butler needed to play a Secret Service agent.

You have two chances to win. For your first entry, just follow us on Twitter and retweet this tweet. Then for a second entry, leave a comment below in response to the following question:

London Has Fallen sees Gerard Butler reprise his role as Special Agent Mike Banning in the latest action sequel from Hollywood.  With more entries planned in other action franchises – Die Hard, the Bourne saga, Predator, John Wick, Alien and Mission Impossible to name but a few – what do you want to see next from the genre? Are you tired of sequels, or could you keep following the adventures of John McClane, Ethan Hunt and co for a while yet? Are there any long-dormant franchises you’d like to see return to the big screen? Whatever you think, let us know!