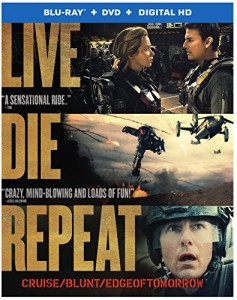 Known in the cinema as just Edge of Tomorrow, the movie – based on the short novel ‘All You Need Is Kill’ by Hiroshi Sakurazaka – was praised by critics for its entertaining blend of high-stakes action with a Groundhog Day-esque, high-concept premise. New Special Forces recruit William ‘Bill’ Cage (Cruise) is equipped with a powered exoskeleton and sent on a mission to fight a fierce alien race known as Mimics, who are ultimately unstoppable. Cage soon dies in combat but, caught in a time loop, he finds himself very much alive and once again facing the same battle. This process repeats itself several times but with every fight Cage grows stronger and more adept. He meets tough warrior Rita Vrataski (Blunt) and together they try to bring down the enemy once and for all. According to High-Def Digest, Edge of Tomorrow is “a smart, fun sci-fi movie with a demo-worthy HD presentation to boot”. If that wasn’t enough, the special features on the disc include over an hour of behind-the-scenes documentaries and deleted scenes.

Tom Cruise’s starring role in Edge of Tomorrow follows several other recent blockbuster roles – including author Lee Child’s Jack Reacher and sci-fi epic Obilivion. He’s also working on sequels to some of his best-loved franchises, including the fifth instalment of Mission: Impossible and a long-rumoured follow up to Top Gun. So this week we want to talk Tom – what’s your favourite role, which didn’t you like and which characters do you think he should return to? Are there any genres or franchises that you’d love to see him join up with? Could you see him become a Jedi in the new Star Wars movies, or don a superhero’s outfit in the Marvel Cinematic Universe?