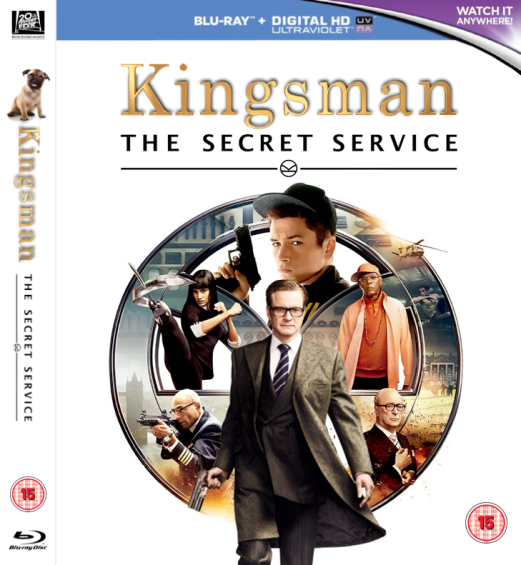 For this week’s Blu-ray Monday we’re giving away a brand new Blu-ray copy of Kingsman: The Secret Service, directed by Matthew Vaughn and starring Colin Firth as a superspy and newcomer Taron Egerton as his unlikely protégé Eggsy. Firth effectively blows away his ‘Mr Darcy’ persona with a spectacular performance as a well-turned out secret agent, in which he essentially plays homage to and parodies the Bond franchise.

Colin Firth’s character, Harry Hart (codename Galahad), combines the best and most ludicrous elements of the British upper class and modern Hollywood action. One moment he muses on the importance of a bespoke suit, and the next he dispatches a band of villains with precise alacrity and nifty gadgets. Hart is a member of the Kingsmen, a highly advanced, well-funded independent secret service independent of any government. The group recruits an unrefined but promising street kid (Egerton) into the agency’s ultra-competitive training programme, just as a global threat emerges from a twisted tech genius. Step forward Samuel L Jackson, a psychotic baddie with a thick lisp with a penchant for decorating his home with portraits of panda bears.

Both action-packed and hilariously funny, Kingsman is well worth owning on Blu-ray. The disc comes with a stellar package of special features, including a feature on how the original comic was translated to the big screen and an amusing exposition on the distinct style and weaponry featured in the movie.

Kingsman is a wonderfully British cinematic gem. Kingsman aside, what’s your favourite British action film? Are you a fan of Guy Ritchie’s London-set crime capers Lock, Stock & Two Smoking Barrels, Snatch or Sherlock Holmes? Or do you prefer Edgar Wright’s ‘Cornetto trilogy’ of Shaun of the Dead, Hot Fuzz and The World’s End? And how could we forget James Bond 007 himself? Share your favourites in the comments.