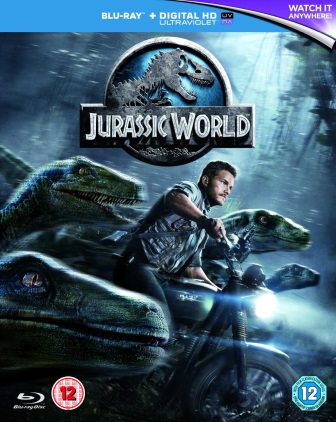 For this week’s Blu-ray Monday, we’re giving away a brand new copy of this summer’s biggest film, Jurassic World.

Set 22 years after the original Jurassic Park, the new attraction – now known as Jurassic World – is open and bigger than ever. Not content with exhibiting dinosaurs which existed thousands of years ago, the scientists at Jurassic World decide to genetically engineer a new breed of dinosaur, one more deadly than ever before. When its containment facility fails, the deadly killer roams loose around the park, silently stalking its prey: humans.

It is down to the park’s Velociraptor trainer Owen Grady, played by Chris Pratt, to protect two young brothers – Zach and Gray – and stop the dinosaur before it’s too late.

The Blu-ray comes loaded with special features, including an in-depth feature examining how Jurassic World was created, a behind-the-scenes look at the special effects, and a tour of the Innovation Centre – which was purpose-built for the movie – led by Chris Pratt.

Jurassic World has so far been the biggest film of 2015, grossing over $1.6 billion worldwide. But, what did you make of the franchise’s reboot? Did you think director Colin Trevorrow did the original movies justice? With talks of a sequel already in the pipeline, are there any changes or actors you’d like to see in the next film? Let us know in the comments below.