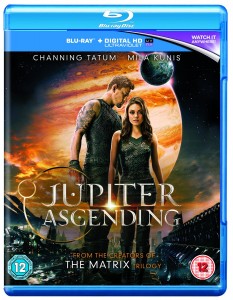 Jupiter Ascending is an original, high-concept space opera. The film focuses on an ordinary cleaning woman, Jupiter Jones (Kunis) who discovers her destiny as an heiress of intergalactic nobility. She must fight to protect the inhabitants of Earth from an ancient and destructive industry. Caine Wise (Tatum), is an interplanetary human-wolf warrior who informs Jones that her fate extends beyond Earth. His job is to protect Jupiter from alien assasins and take her to outer space, where the heirs of Abrasax Dynasty are plotting against her.

The film is written and directed by the Wachowskis, who created the unforgettable world of The Matrix. So expect a similar display of awe-inspiring, cutting-edge special effects which will look incredible on Blu-ray.

As usual you have two chances to win. For your first entry, just click on the tweet button above. For a second entry, leave a comment below in response to the following question.

Channing Tatum’s star has truly ascended in Hollywood. He’s been in a slew of films across a range of genres, from science fiction (counting Jupiter Ascending of course), comedy (21 Jump Street), action (G.I. Joe), drama (Foxcatcher, Magic Mike) and romance (Dear John and The Vow).  And there are more coming, including X-Men spin-off Gambit and the Coen Brothers’ Hail Caesar. So want to know: what’s your favourite Channing Tatum movie or role so far? Do you prefer his comedic side or his dramatic roles? What else would you like to see him take on next?