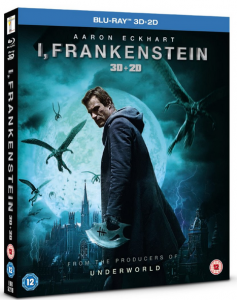 This week we’re giving away a copy of I, Frankenstein, director Stuart Beattie’s vivid reimagining of Mary Shelley’s classic gothic tale about a man made monster.

This movie kicks off in a dystopian present, two hundred years after Victor; the creator of Frankenstein’s monster, has died.  The monster, Adam Frankenstein (Aaron Eckhart), is forced to battle against gargoyles and demons to survive. Critics have singled this movie out for its “crystal clear 3D effects” and “gorgeous cinematography”, so it is definitely one for Blu-ray fans. In addition, the Blu-ray features extras on creating the monsters in the movie, as well as a director’s commentary.

I, Frankenstein used some amazing CGI to reimagine a classic monster. So we wanted to know which other onscreen movie monsters have really caught your eye? Perhaps it is more modern portrayals of mythical monsters , like Joe Johnson’s moody Wolf Man (2010), Stephen Somers eye-popping Mummy (1999), or Francis Ford Coppola’s seductive Dracula (1992). Or perhaps modern monsters like the skyscraper sized Cloverfield (2008), the creepy Pale Man in Pan’s Labyrinth (2006) or Eric Banner’s indestructible Incredible Hulk (2003) captured your imagination?