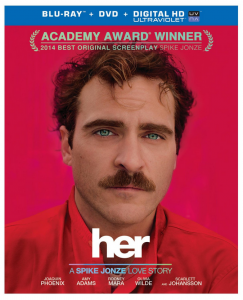 For this week’s Blu-ray Monday we are giving you a chance to win a copy of Spike Jonze’s “sweet, soulful and smart” sci-fi rom-com, Her.

One of the most critically acclaimed movies released in 2014, Her won Best Original Screenplay at this year’s Academy Awards. The movie stars Joaquin Phoenix as Theodore, a lonely divorcee, who is employed to write love letters for strangers. When Theodore encounters Samantha (Scarlett Johansson), his new, artificially intelligent computer operating system, he falls in love.

According to critics, Scarlett Johannson finds the “perfect tone” to play artificially intelligent system Samantha. So this week, we want to know what your favourite big screen artificially intelligent character is. Maybe it’s Pixar’s Wall-E, Short Circuit’s Johnny 5 or David from Steven Spielberg’s A.I., who all ask questions about a robot’s capacity to love? What about Arnold Schwarzenegger’s Terminator – who of course has been both good and bad in his various appearances – Agent Smith from The Matrix, the replicants from Blade Runner or the unnerving computer HAL from 2001: A Space Odyssey? Whether good or bad, super-intelligent or still with lots to learn, let us know your favourites below.