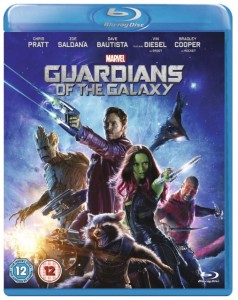 For this week’s Blu-ray Monday, we’re giving away a copy of Marvel Studios’ latest smash hit, Guardians of the Galaxy.

From the studio that brought you the global blockbuster franchises of Iron Man, Thor, Captain America and The Avengers, comes a new team – the Guardians of the Galaxy. This action-packed, epic space adventure expands the Marvel Cinematic Universe into the cosmos, where brash adventurer Peter Quill (Chris Pratt) finds himself the object of an unrelenting bounty hunt after stealing a mysterious orb coveted by Ronan, a powerful villain with ambitions that threaten the entire universe. To evade the ever-persistent Ronan, Quill is forced into an uneasy truce with an uneasy truce with a quarter of disparate misfits – Rocket, a gun-toting racoon voiced by Bradley Cooper, Groot, a tree-like humanoid brought to life by Vin Diesel, the deadly and enigmatic Gamora (Zoe Saldana) and the revenge-driven Drax the Destroyer (Dave Bautista). But when Peter discovers the true power of the orb and the menace it poses to the cosmos, he must do his best to rally his ragtag rivals for a last, desperate stand – with the galaxy’s fate in the balance.

Ahead of its cinematic release, some thought the little-known characters in the Guardians team might not be able match to match the success of their colleagues from the Avengers – but the film was a worldwide smash, captivating audiences with its charm, humour and heart. The Blu-ray of course contains Marvel’s usual array of encyclopaedic behind-the-scenes features.

Guardians of the Galaxy put the cherry on top of this year’s annual crop of summer blockbusters. We’ve had epic superhero stories (X-Men: Days of Future Past, Amazing Spider-Man 2), legendary monsters (Godzilla), bombastic sequels (Transformers: Age of Extinction), riotous comedies (22 Jump Street), blockbusters-with-brains (Dawn of the Planet of the Apes), coming-of-age drama (Boyhood) and soaring animation (How to Train Your Dragon 2). So the question this week, quite simply, is which was your favourite movie of summer 2014 and why?