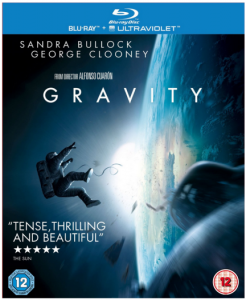 Gravity dominated the BAFTA Awards last night, scooping six Awards, including Best British Film, Best Director, Best Cinematography, Best Sound and Best Original Music. So this Blu-ray Monday, we’re giving you the chance to get your hands on a copy of this audio and visual treat of a movie, in high definition on Blu-ray.

Sandra Bullock stars as Ryan Stone, a medical engineer on her first shuttle mission into space. Ryan’s accompanied by veteran astronaut Matt Kowalski (George Clooney) who’s on his last flight before retirement. During a routine spacewalk, something goes terrifyingly wrong and the pair is forced into a gripping struggle for survival as they are flung out, attached only to each other, into space. The Blu-ray also provides a unique insight into shooting this extraordinary movie, with features on how to film Zero G and an overview of the incredible visual effects.

London Studio Framestore spent three years developing the CGI which created one of the most convincing portrayals of space ever seen in Gravity. So this week, we wanted to know what you’re favourite space movie is? Is it a futuristic one, like Star Wars, WALL-E or Avatar? Or are you into more retro flicks, Apollo 13 and Moon? Perhaps you’re a fan of the simply mind boggling, such as 2001: A Space Odyssey, Solaris and Sunshine? There are plenty of examples to pick from, so we’re excited to see your suggestions.