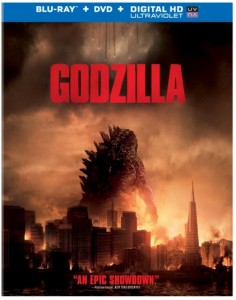 For this week’s Blu-ray Monday, we’re giving away a brand new copy of Godzilla, the new version of the classic Japanese monster legend, starring Aaron Taylor-Johnson and Bryan Cranston.

Godzilla is a name that’s synonomous with giant monsters. Following decades of successful films in his home country of Japan, comes this second Hollywood treatment (following director Roland Emmerich’s 1998 version). And it doesn’t disappoint – with a tense, dramatic and spectacular reimagining of the legend from director Gareth Edwards (soon to start work on his own Star Wars movie). When a devastating event is covered up as a natural disaster, nuclear physicist Joe Brody (Cranston) realises something much more sinister is to blame. Scientists reveal that in 1954 a powerful monster was awakened, and though ‘nuclear tests’ were carried out in the Pacific Ocean to destroy it, the creature has now returned. With the US Armed Forces, including Joe’s son Navy Lieutenant Ford Brody (Johnson), called into action, humanity fights for its survival. The stunning Blu-ray visuals and sound bring Godzilla to life at home like never before, while seven featurettes let you go behind the scenes on how it was made.

Godzilla’s back to reclaim his title as king of the monsters. But the competition is pretty tough – in recent years we’ve seen hordes of giant ‘kaiju’ lay waste to the world in Pacific Rim, watched King Kong face off against an angry T-Rex (something we might see more of in the forthcoming Skull Island) and witnessed first hand the destruction caused by a mysterious skyscraper sized creature in Cloverfield. And then there are plenty of regular sized monsters too – from the iconic Mummy, Dracula and Wolfman to more modern creations like Alien or The Walking Dead. So quite simply, this week we want to know who your favourite movie monster is and why! Which would you like to see more of? Which would you like to see fight each other? Which future monster movies (including sequels to both Pacific Rim and Godzilla) are you looking forward to the most?