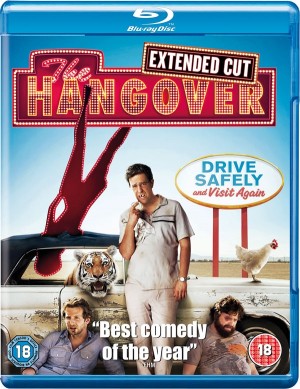 This week, we’re giving away the outrageous, entertaining, laugh-out-loud classic The Hangover on Blu-ray disc.

Hailed by many as the funniest film of 2009, The Hangover tells the story of Doug (Justin Bartha), on his stag do in Las Vegas with his three groomsmen; Phil (Bradley Cooper), Stu (Ed Helms), and soon-to-be brother-in-law Alan (Zach Galifianakis).

His trusted companions promise him a bachelor party he’ll never forget but inadvertently end up losing him before finding themselves on an epic, comedy struggle to locate him and return him home in time for his wedding.

If you were getting married in two days time which characters from a film / TV series would you want to accompany you on your stag do / hen night and why?

To make it easier for us to contact you, leave your Twitter details with your comment.¬† We look forward to your suggestions!